Why does painting no longer succeed in activating "the original dynamic that for centuries has identified art with the very concept of painting?"

Pietro Finelli, (1957), studied architecture at the Federico II University of Naples. He is an artist, curator, and theorist who lives and works in Milan. He has exhibited his work in galleries, museums and international institutions, including MC Gallery, New York; Il Ponte Contemporanea, Rome; Galleria Pack, Milan and many more. Today we speak to him about his journey and his views on evolution of visual space.

Tell us a little about yourself . Who are you? And what do you do ?

I am a painter, living and working in Milan. After graduating in Architecture from the Federico II University of Naples, I undertook a personal path of in-depth study both of the theory of arts and the pictorial medium, reflecting on their influences and meaning related to the contemporary development of technology.

Can you tell us about your artistic journey since the beginning up-to-date (how your research developed, transformed and in what direction and why) ?

I focused particularly on drawing as an idea, or a mental fact. On the support of which an idea was implemented, producing an heterogeneous and independent body of work related to this idea (my very first exhibit was mainly an exhibit on drawing itself, realised in Milan by Zeus, and immediately after in New York by Zeus-Trabia, in the middle ’80).

After that, I did an exhibition project in the mid 1990's "Being Beauteous" , on the radical critique of the object of art (a subject that has been copied through the years after my installation).

During the same period, I also made some videos and curated my first exhibit with other artists and writers, followed by other curatorial exhibits. Up until the present when I got more and more involved in a phase highly characterised by a strong cinematographic component that led me to the implementation of an important project – Noir Time – at first at the Muzeul Naţional de Istorie a Moldovei in Chisinau, Moldova and then at the KCCC of Klaipéda, Lituania.

What is the evolution that you have seen in the art performance in the visual space. How do you see the tech evolution in your work and aesthetic?

The very first contemporary art exhibit I had the chance to see as a teenager was in Rome, curated by Achille Bonito Oliva in the parking lot of Villa Borghese – Contemporanea – in 1974 , an exhibit that could compete even to Documenta V in Kassel, which was two years prior. They represented all the languages and media, from graphic art to performance, video, photography, cinema, music and architecture.

Technologies were already present in the historic avant-garde in the arts field and, with the coming of the computerised system, they became part – even if in a different way – of so many artists’ “system” and contemporary art.

I feel that an art work which has a very close presence with technology may become obsolete after few months, following the similar trajectory as that of technological gadgets that keep getting replaced on a monthly basis.

What is more important when working with technologies is to have a vision and an idea pivotal to one’s own work. In my case this happens through cinema and, more specifically, dismantling the filmic machine and re-proposing it via drawing and painting, among others. 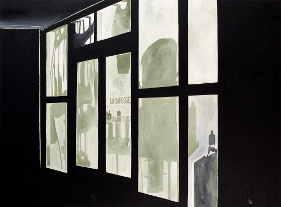 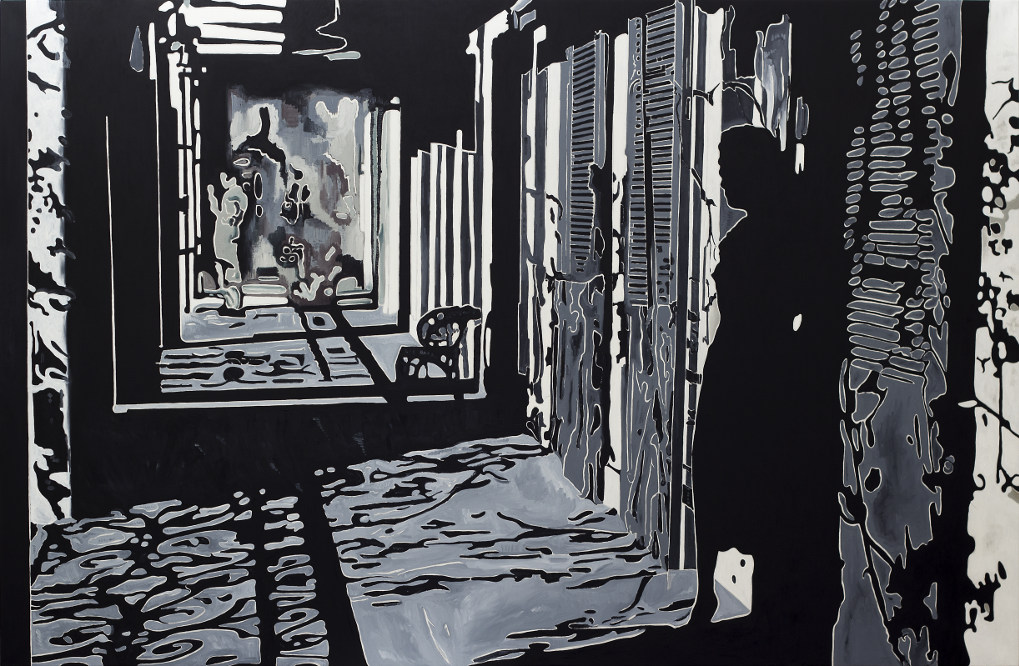 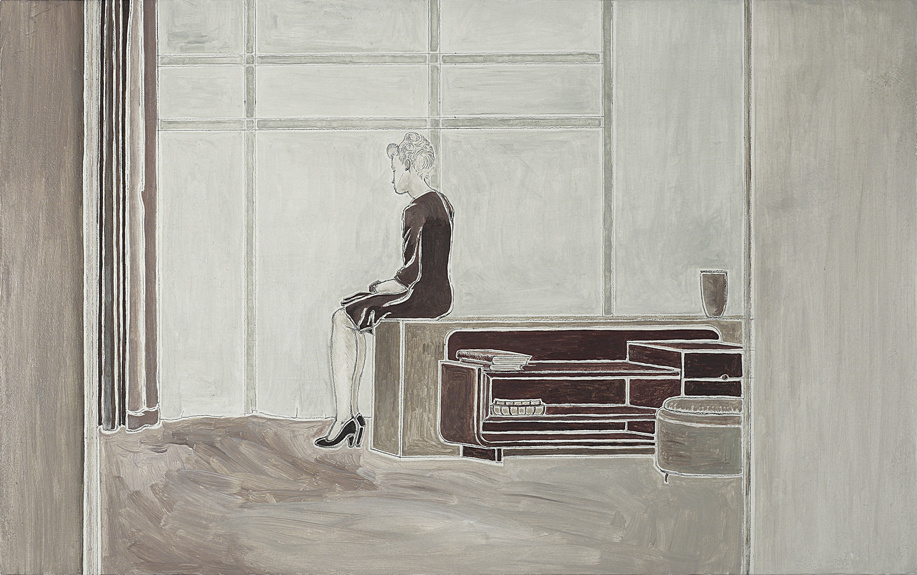 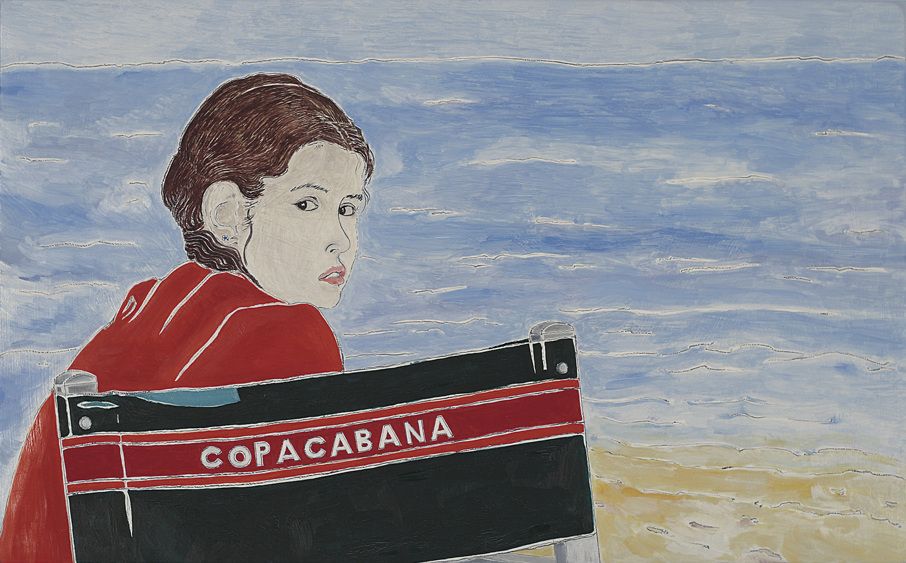 Where does you interest for painting movie sequence come from and what is the meaning of it to you? In this area it seems that the majority of your work is in Black and White why is that?

My interest towards cinema has been constant throughout the years, with peaks related to the different periods of my work (considered that my entire artwork takes place in year cycles that may also be connected to each other), it is only during the past decade that it has systematically focused on the cinematographic image, which is never a mere or derivative take from one medium to another, but rather a questioning point on the sense and importance of the cinematographic image itself. To me cinema, mainly in its classic period of the ‘40/’50, is the articulation that deepens the ratio between vision and blindness, light and dark.

The radical work made with the images, in an interpretation of noir as “life’s moral vision based on the style able to solve conflicts through visual terms and not thematic ones” (Paul Schrader), is what really distinguishes my work as artist.

in fact a linguistic choice of resetting the available vocabulary and preferring a meagre and essential one, against the indiscriminate proliferation of the image.

Nevertheless, such monochromatism is more difficult

and complex, as it is the result of a continuous sharpening.

You master different means and techniques of expressions how do you choose among them and what are the drivers for such choice?

​I work from time to time on a group of image-time, and then on a group of drawings or sketches. I disassemble the filmic machine and then I reassemble it in my imagination. Or, in case of a curatorial project with other artists, I always try to cross different terms suitable for provoking or give a meaning.

As an artist what is the best piece of advice you’ve been given?

Favourite artwork of all time?

Raffaello’s “La Trasfigurazione”, but also the movies of the authors I mentioned above, such as E. Dmytryk’s Murder, My Sweet, or R. Siodmak’s Phantom Lady. But as I said, these are just partial examples.

What does “dare” mean to you in your life and in your work?

We are in the middle of a tragedy of biblical proportions that is affecting the entire world, without exception.

Hoping that it will end as soon as possible, my wish is that Culture - in its many forms could act as a stimulus to help us rebuilding a wounded and shattered humanity.

Behind, beyond, like Pedro Salinas is pointing in one of his poems.

Interview and Article by

THE SEA CALLED ME BUT ART CAPTURED ME: JAVIER CAPETILLO

ALTOMONTE 2020: COME WITH ME INTO THE VOID